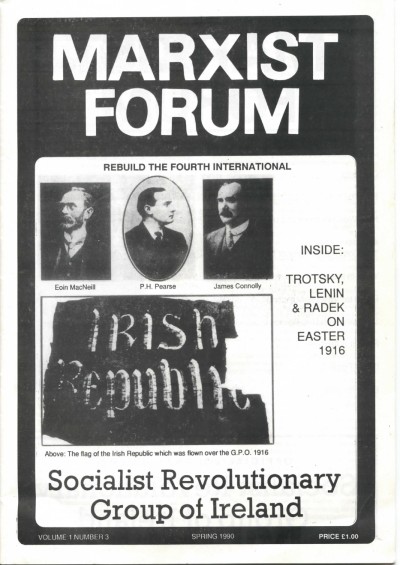 Here is an unusual document, not least because the formation which published it, the Socialist Revolutionary Group of Ireland was very small. The SRGI was a splinter group from the wreckage of the Workers Revolutionary Party, famously led by Gerry Healy. The SRGI was affiliated to the group around Cliff Slaughter  that retained the WRP (Workers Press) name for a time. The international affiliation was with the Workers International to Rebuild the Fourth International. A prominent element of the WIRFI was a South African section.

The SRGI would appear to have had a very small membership – though any details would be gratefully accepted. However it clearly managed to produce at least three issues of Marxist Forum. The contents is reasonably varied and includes pieces on the formation of the WIRFI, an Open Letter to the Communist Party of Ireland which offers assistance to that party in the wake of changes in the USSR under Gorbachev.

Perhaps tellingly there is little information on the SRGI itself. The Editorial notes that:

…the working class is not defeated. And the next period in Ireland is certain to produce sharp, and even violent class conflicts. The fight for the independence of the working class is central to the tasks of the Socialist Revolutionary Group in the fight with our comrades in the Workers International for the re-building of the Fourth International.

There are two linked articles, one ‘What is Marxism?’ written by ‘a Republican Prisoner’. It notes that:

Its contents formed the framework for education classes in the jail and the author was part of the group of prisoners who wrote the important book ‘Questions of History, Part 1’. Published by SF Educational Dept., this dealt with the period from Wolfe Tone to the Republican Congress (1934). Part 2 has yet to be published.

The accompanying piece under the heading ‘Reply to ‘What is Marxism’’ offers a critique of the first article.

A further piece is ‘Solidarity with Des Warren’, a picketer ‘jailed at Shrewsbury following the national building workers’ strike of 1972 [whose] trial on conspiracy charges was part of the attempt by the Tory government of the day to destroy basic trade union rights’.

There’s also ‘From the Archives’, ‘Lessons of the Events in Dublin’ – an essay by Leon Trotsky on the 1916 Rising.

There’s also a review by Anthony McIntyre of ‘Polmaise: The Fight for A Pit” by John McCormack with Simon Pirani, which is an account of the miners strike.

The Socialist Revolutionary Group of Ireland was a group affiliated with the Workers’ Revolutionary Party (Workers Press) - the WRP splinter led by Cliff Slaughter - and the newly-founded Workers International to Rebuild the Fourth International.…

See Socialist Revolutionary Group of Ireland in the archive

Marxist Forum was produced by the Socialist Revolutionary Group of Ireland in the early 1990s.…

See Marxist Forum in the archive