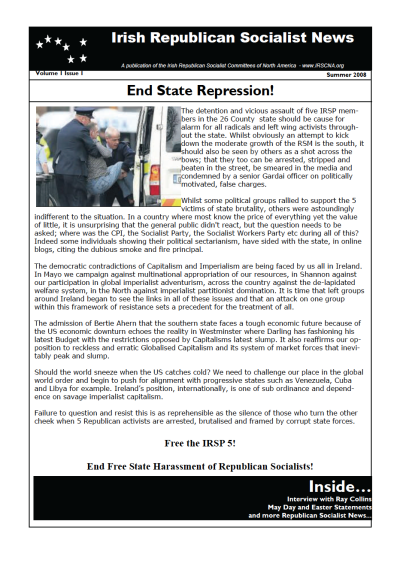 Many thanks to the editor of this publication for forwarding it. This was a document produced and distributed in the United States in support of the the IRSP.

As the editor notes:

This was published during 2008 and 2011. The first 2 issues were called Irish Republican Socialist News (IRSN) before it was changed to Seven Stars. It was intended to be published quarterly. It was handed out free of charge and was available online. Copies were sent to IRSCNA cummain in Chicago, Kansas City, Seattle, Austin, Medford, Minneapolis, and Detroit. There would have been distributed and left wing events as well as more traditional Irish Republican commemorations. This was a time when the IRSP’s paper the Starry Plough was not being reguarily published and areas such as Belfast and Derry were producing their own news sheets.

At 12 pages long, A4 and with some colour it is a very comprehensive publication. The cover story calls for an end to state repression, noting ‘the detention and vicious assault of five IRSP members in the 26 County State’. It notes that ‘some political groups rallied to the support the 5 victims of state brutality, others were astounding indifferent to the situation…where was the CPI, the Socialist Party, the Socialist Workers Party etc during all this?’

Inside it notes that ‘an April article published in the Irish Times [states] that there is no INLA connection to the drugs trade in Ireland’ quoting Det. Supt Barry O’Brien from the Garda National Drugs Unit.

There are also May Day Greetings from the Irish Republican Socialist Committees of North America. It notes that:

As this May Day dawns, the workers of the world remain exploited by a global capitalist class in its unending quest for profit. The Cuban Revolution remains defiant in the face of this and Venezuela continues to pursue a progressive path, but until the working class collectively and globally rises against the capitalist order, a better world for all will remain out of reach. We, the workers, are the ones with the power to build that world, and build it we must.

Another page details the first IRSCNA Ard Fheis since 1999 and another has a May Day statement from the IRSP. There’s an interview the singer songwriter and activist Ray Collins.

There’s a lengthy assessment, ’10 years on from the Good Friday/Belfast Agreement’ and a report which was delivered by IRSP members in Catalonia. Finally there is an IRSCNA Easter Statement which notes that:

The IRSCNA is proud to continue representing the IRSM, building solidarity as well as giving practical aid and support to the best of our ability. We stand firm in the Republican Socialist tradition begun by Connolly and continued today by the IRSP. The IRSM’s political analysis and leadership has never been as sorely needed as now: the Republican Socialist analysis and programme is the only one within Irish antiimperialism that can both understand the line of march and lead by example.