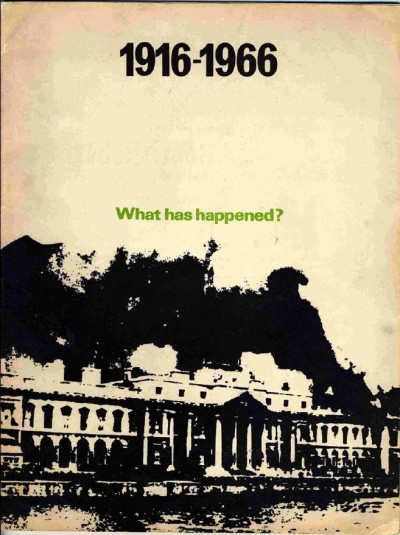 In a way this document is unusual for the Archive. It appeared in 1966 and was, as a paragraph on page 1 notes:

…a collection of articles which attempt to asses the progress of Ireland, starting fifty years ago, in every field. All the contributors are Irish – Journalists, University Lecturers or Professional men and women highly respected in their own fields who have been asked to explain what has happened to the goals of the 1916 leaders. ‘1916 – 1966′ is produced by the non-profit undergraduate TCD Publishing Company….

Yet it presages future developments and attitudes quite clearly in an overview that incorporates a broad range of contributors included a youthful John Horgan, Séan O’Faolain, Anthony Coughlan, Bruce Arnold, Mary MacSwiney, Maire Comerford, Martin Donohue and Roy Johnson. Unsurprisingly, with that lineup there is a certain slant to the analysis. And the presence of Coughlan and Johnson point towards the future directions of the Republican movement.

Indeed on page 15 there is an interesting history which notes that:

JJanuary of last year saw the initiation again of violence in the Republic: the Abbeyleix affair, sparked by the visit of Princess Margaret, including the first organised physical demonstration since 1962. It was followed by small but news-making incidents, including the attempted machine-gunning of a boat of Her Majesty’s Royal Navy off the coast of Ireland.

A struggle within the Republican ranks between the old die-hard ‘unite or bust’ campaigners and a new left wing (but certainly not Communist) element culminated late last year in the final victory of the new wing. But because the destruction of the Plllar bore the stamp of the die-hards, what brought Ireland such fame may have been instigated by nothing more than the determination of one faction of the Republicans to prove to the others their vitality.

The new element advocates better social services and education, there is a distinct possibility they may be persuaded to sit in the Dáil – long considered an act of treason by ‘Real Republicans’ – but such a truly revolutionary step is unlikely to be aided by the 50 year celebrations and their accompanying confusion and doubts.

Indeed. Yet it is this opportunity to gain some insight into the thinking of those who sought to explain the present, as it was then, in terms of the past while almost entirely unaware of the future that lay directly ahead which gives this document a certain significance.