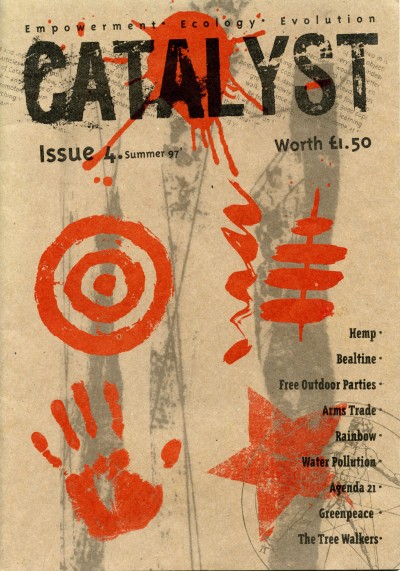 Many thanks to IEL at Irish Election Literature  for forwarding this to the Archive.

This is an interesting addition to the Archive, Catalyst magazine published during the 1990s and representative of strands positioned within the broad ecological movement. The magazine itself was produced by dint of assistance from the Area Based Allowance according to the editorial – ‘an initiative of the Dept. of Social Welfare to promote employment’ and it notes that it was exploring ways ‘to establish Catalyst as a sustainable business’.

It also notes that ‘The eight months since the last issue appeared have been active ones for us – much visualisation, strategy and energy put in to manifesting our ideals in our living. We’ve been led to some important connections and insights, many of which are reflected in the articles we’ve assembled for you.

It has been wonderful for us to witness and participate in the wave of personal and community healing and empowerment that is so obviously, slowly and surely revolutionising life in Ireland. The scale of our challenges here becomes apparent when one reads about the water pollution scandal or infringements on civil liberties.

The contents is very varied with revised of The Solstice Bograve and news of how the Octagon free party was raided. There’s a piece on various ‘collectives’ including Garden of Delight, Dublin Alternative Radio Collective and Soul Gun Warriors. Another examines ‘internet sites and info’.

There’s a series of pieces on hemp, the Glending Forests, Waste Disposal in Co. Clare and Genetic Engineering. Others address the Arms Trade with specific focus on Irish companies involved, Greenpeace, Community News amongst others.

There’s a long piece on the Zapatistas uprising in Mexico and information on an ‘expected extraterrestrial intelligence contact’ in Ireland. All told an unusual mix.

Any other copies would be welcome.

Catalyst magazine, published during the 1990s, was representative of strands positioned within the broad ecological movement. The magazine itself was produced by dint of assistance from the Area Based Allowance according to the editorial – “an initiative of the Dept. of Social Welfare to promote emp…

See Catalyst in the archive