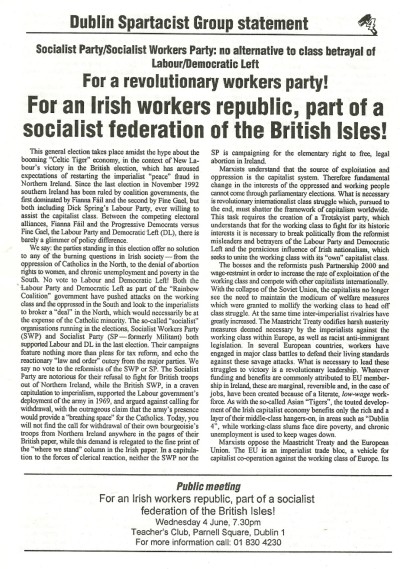 This document, a short four page A4 publication, joins others in the Archive from the Spartacists. It calls for ‘A revolutionary workers party!’ and ‘For an Irish workers republic, part of a socialist federation of the British Isles!’. It’s main focus is on the upcoming General Election in the Republic and it is scathing of all forces on the political spectrum.

The Workers Solidarity Movement, whilst not calling for votes in the election, offers the same sub-reformist drivel as the SWP and SP, in posters which moan about ‘corruption’ among politicians. For all their pretence of opposition to the capitalist system, the WSM’s politics are restricted to what they think can be obtained with the capitalist system. At the height of the struggles for abortion rights, the WSM was in a prominent position but restricted their demand to legislation of abortion information and steered clear of fighting for free abortion in Ireland. They also gave back handed support to British imperialism, when they whined that the breakdown of the the ‘peace’ process was a ‘tragedy’.

There are various subsections addressing a variety of topics: ‘British troops out of Northern Ireland now!’, ‘No to class collaborations!’, ‘For free abortion on demand! For women’s liberation through socialist revolution!’, ‘Down with the government’s ‘Law and Order campaign’!’ and ‘Forge a Trotskyist party!’

In regard to that latter it argues:

With the bourgeoisie crowing about the ‘death of communism’ the ‘socialism’ proffered by the reformist left consists of pleading for modifications to the capitalist system. We believe that it is possible and necessary to bring an end to exploitation and oppression, through overthrowing the capitalist system. Those who create the wealth – the working class – must rule.

Building that party to provide revolutionary leadership is the task of the Dublin Spartacist Group,part of the International Communist League (Fourth Internationalist).