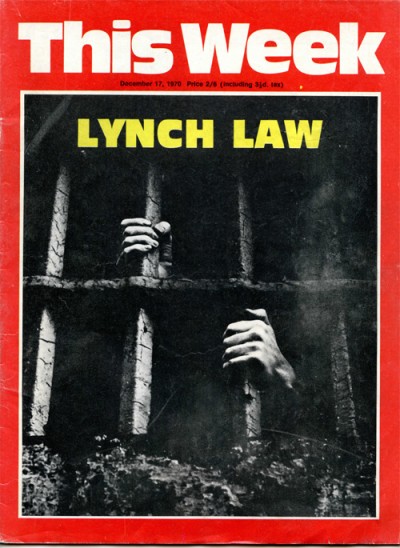 Many thanks to Brian Hanley for forwarding this to the Archive.

This is a very interesting addition to the Archive in relation to a number of areas. As a current affairs magazine This Week was published in the late 1960s and early 1970s and can be regarded as a precursor of Magill.

Published by Hugh McLaughlin – who also founded and published Sunday World, Sunday Tribune, The Farmer’s Journal and Business and Finance amongst others – and edited by Joseph O’Malley and with John Feeney as the assistant Editor it is not, as such, a left wing publication, but it has what appears to be a certain left of centre sympathy and offers a fascinating insight into the period. Some will recall a later edition that carried a report and front cover photograph of the funeral of Peter Graham of the Dublin based Saor Éire – the photograph of which and article in TW is reproduced here on Dublin Opinion .

There are a broad range of pieces within, including some on the Fianna Fáil government, led by then Taoiseach Jack Lynch. The lead story is a curious one which references what is alleged to be an ‘alleged kidnap-assassination plot’ and leans heavily on the issue of internment and the prospect of that being introduced in the Republic. On pp43 the reaction of both Sinn Féin’s to this prospect is reported.

There’s a piece by future Labour Party leaders Michael O’Leary on the relations between RTÉ and the Government. Eavan Boland writes on Solshenitsyn, and linked to this is areview by Cathal Goulding (then Chief of Staff, I.R.A.) of The Secret Army: J. Bowyer Bell. In it he is extremely positive in relation to the book.

It is also worth mentioning the advertising, provided by state companies, private enterprises and so on. It is in total a very well produced publication for its time.

This Week was published in the late 1960s and early 1970s and can be regarded as a precursor of Magill.…

See This Week in the archive