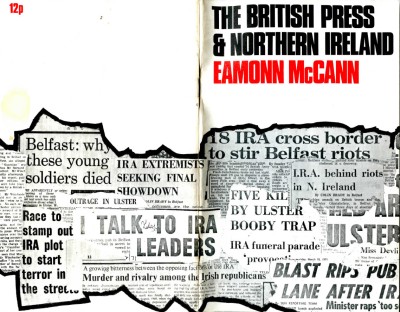 This document was published in 1971 by the Northern Ireland Socialist Research Centre, of which there is on information available, although presumably it was connected closely with the Socialist Workers Movement founded that same year.

Its contents is wide-ranging, engaging with a variety of examples of what it considers to be breaches in journalistic standards in the British Press, but the Introduction gives an impression of the contents:

British newspapers are wont to congratulate themselves on their high journalistic standards. The British people are encouraged to believe that their press is the best in the world. Phrases such as the ‘guardians of liberty’ have been known not to stick in the throats of leader-writers.

During the past three years while editors and higher executives have whiled away the time in contemplation of their own ethical purity, the job went on of managing and mangling the news from Northern Ireland. Most British people have a distorted view of what is happening in NI. This is because they believe what they read.

There have been honourable exceptions. But examination of reports reveals a clear pattern of distortion. The news has systematically been presented, consciously or not, so as to justify the assumptions and prejudices of British establishment and to serve the immediate political needs of British governments.

It notes that the press was ‘generally favourable’ to the Civil Rights Movement. ‘Editorially ever paper backed O’Neill, who was portrayed as a ‘cautious crusader’. There was little or none of the cruder distortion which was to come later’.

And it agues that:

The real, sustained and systematic distortion began when British soldiers came onto the streets, and by the middle of 1970 when the troops were in almost constant conflict with Catholic working-class neighborhoods most papers had in effect stopped carrying the news. They were vehicles for propaganda. Some incidents were ignored. Others were invented. Half-truths were presented as hard fact.

Interestingly it does not distinguish between what it terms ‘different wings’ of the IRA.

In the Postscript it argues that:

A free press would be one disentangled from the whole system of private ownership. Recently some journalists… have become disenchanted with the manipulation of news…no longer content merely to feed their unused stories to Private Eye, they now seek to remedy this situation by demanding a ‘democratic’ press. By this they mean some form of ‘journalists’ control’, the right of journalists to sit on company boards or to have a say in formulating editorial policy.

This is trendy nonsense. As shown above, the newspaper industry is an integral and necessary part of the capitalist system. It cannot be detached form it and its problems dealt with in isolation by some minor internal restructuring. The fight to free the press to tell the truth is the fight to end the system which needs to destroy truth.

Exploring Left politics in Ireland past and present, and the materials in the Irish Left Archive .