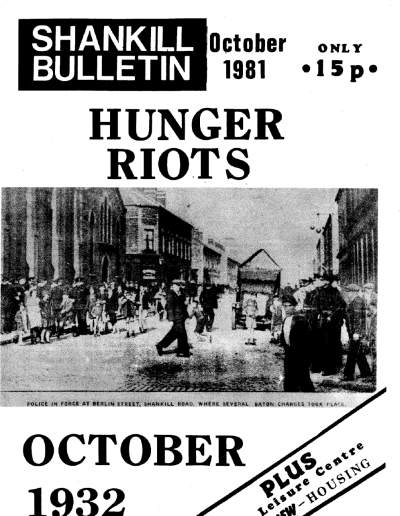 This is an interesting document donated to the Archive by Alan Mac Simoin. Produced by community groups on the Shankill under the ‘Shankill Education Workshop’ from the late 1970s into the early 1980s, it commemorates the Hunger Riots of October 1932.

For more information on the SET and the aims of the Shankill Bulletin this site is very interesting , as well as giving an insight into the growing role of community development.

What is striking is how strongly class oriented it is. The leading article on the Hunger Riots notes that:

Forty nine years ago this month was a truly historic moment in the history of the working people in Belfast, when the Falls and Shankill fought side by side against the evils of poverty and starvation. The depression of unemployment had soared to over 60,000 and conditions were appalling.

It also quotes Mr. T. Geehan, Chairman of the Relief Workers Committee that ‘the workers are going out on the streets… if there is any trouble the responsibility will lie on the shoulders of the authorities… for long years the working class of Belfast has been divided by the old artificial barriers of religion and politics – they are now united in a struggle around one common platform, the motto of which is the right to live.’

The piece is accompanied by a range of photographs.

Also included in the newsletter is an interview with Inez McCormack of the National Union of Public Employees. And this too takes an explicitly working class line. There’s also a strongly anti-Tory emphasis, as exemplified both in the McCormack interview and in articles on Housing Policy. In terms of Northern Irish politics mention is made of the DUP.

There’s a strong community emphasis to this production including a piece on development of the Hammer Site. One further element of interest is that the comic strip Screw the Bap & Head the Ball ran throughout the issues and apparently, according to this site , were published as an album in 1979.

The Sammy Miller mentioned on page 13 was a leading member of the UDA, who got elected – in a by-election – to Belfast City Council in the year of the Hunger Strike, 1981. During the full Council elections a few months later he held on to his seat. The Provisional IRA tried to kill him but only managed to wound him.

In sum the document is a reminder that there was a significant element of loyalism in the 1970s that grew out of a trade union and left background, something that is often forgotten in the image of loyalism as being populated exclusively by Johnny Adair types.

The Shankill Bulletin was published by the Shankill Education Workshop. It was started in 1978, and appears to have continued until 1988.…

See Shankill Bulletin in the archive