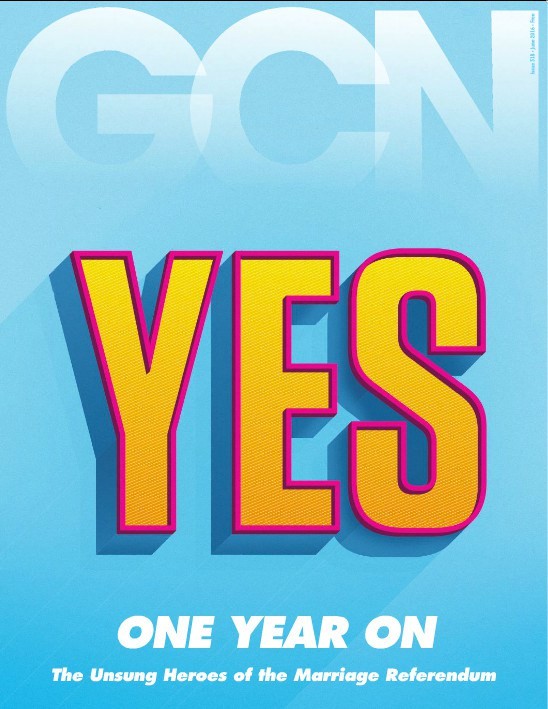 It is a year since we voted not only to lift the ban on same-sex couples getting married, but to place an obligation on the state to put in place a law for marriage equality.

Marriage equality was not always the priority for the gay community. This post looks at the evolution of interest in that topic and the related questions of gay families and of the recognition — both legal and unofficial — of partnerships. It is far from a scholarly article: First, it uses just one strand of data: the pages of Gay Community News (GCN) in the first half of 1990s; second, my collection of back issues is incomplete. Never the less, they illustrate what the gay community’s leaders were saying and what its media felt was important to report.

The first issue of GCN in my collection is from 1990, and even that is too late if you want to do a complete analysis, because it does not show if or how the Irish lesbian, bisexual and gay community reported on or reacted to the introduction of civil unions in Denmark in 1989.

The first two cuttings are from issues of GCN published a little over two years apart, in December 1990 and April 1993. They are interesting not for what they say about marriage, civil unions, same-sex couples of lgb families, but for the complete absence of anything on those topics. But they were both written before male homosexuality was decriminalised in June 1993, and the priority in Ireland at the time was to secure that piece of law reform.

It is interesting, then, that the first mention of marriage for a gay couple in this sample of GCNs comes less than a year after the Oireachtas brought Irish law into compliance with the European Convention on Human Rights, following David Norris’s win in the European Court of Human Rights. However, it wasn’t in Ireland, but in Russia, where a couple applied for and were refused permission to register their marriage. The same issue has a short piece about a protest outside the Danish embassy in London, where Outrage asked the Danes to invade Britain, taking with them their civilised laws, including civil unions.

The third piece from that May 1994 issue is a report of an open meeting GLEN held with its “sponsoring” groups — that is, the lgb organisations around the country. The absence of a reference to civil unions, partnership, same-sex marriage, or lgb families suggests that they were not on the agenda.

A month later, in June 1994, we see the first references to Irish lgb couples. On the Health and Lifestyles page, Ciaran O’Keeffe wrote a feature article about the need for same-sex couples to make a will.

But the first calls for legal recognition for Irish same-sex couples that is reported in GCN came not from within the lesbian and gay community, but from Fianna Fáil. The European elections were held in June, and GCN contacted the candidates to ask them each to contribute 150 words on the relevancy of their candidacy to lesbians and gay men. Fianna Fáil’s Olive Braiden was unsuccessful in the election, but she did identify the specific issue of inheritance and insurance rights of partners as an issue in her short piece for the paper.

On the other hand, Fine Gael’s Jim Mitchell was opposed:

Making provision for marriage between or adoption by, a couple of the same sex raises fundamental questions and I do not support such proposals.

Pat Rabbitte stood for Democratic Left in that election, and he referred to coverage of a report adopted by the European parliament thus:

Lurid banner headlines screamed gays to marry!, followed by pontification on the decline of the west — hardly the hallmark of a tolerant society.

A further development from abroad was also mentioned in the June 1994 issue: the Swedish parliament considered a bill to create registered partnerships, although GCN‘s headline is the misleading “Swedish Marriage”.

The final two extracts from 1994 were both published in the September issue, and show that the reticence in the lgb community’s leadership was not necessarily shared by everybody in that community. Drogheda’s lgb community held its first pride event in July. One of the highlights of the pride disco, GCN reports, was a lesbian ‘wedding’ (with inverted commas in the original). The paper also devoted a full page to lesbian parenting — specifically, how to become a parent through the assistance of a sperm donor.

The Path to Marriage Equality in GCN: Part 2

To mark the anniversary of the marriage equality referendum, The Irish Left Archive is publishing a short series of articles on the evolution of discussion of same-sex couples, lgb families, and their legal recognition, as portrayed in the pages of Gay Community News in the 1990s. The first in this series covered the years 1990 to 1994; here we continue the story with material from 1995 and 1996. The articles are from my collection of GCN issues from the 1990s. (My collection is incomplete, and important developments may not be included because of that.)

The Path to Marriage Equality in GCN: Part 3

To mark the anniversary of the marriage equality referendum, The Irish Left Archive is publishing a short series of articles on the evolution of discussion of same-sex couples, lgb families, and their legal recognition, as portrayed in the pages of Gay Community News in the 1990s. The first article in this series covered the years 1990 to 1994; the second article continued the story with material from 1995 and 1996. This article concludes the mini-series with articles from my collection of GCN issues from the remaining years of the 1990s, and a handful from 2000. (My collection is incomplete, and important developments may not be included because of that.)

GCN (Gay Community News) is Ireland’s longest-running national gay publication and a not-for-profit registered charity. It was first published on February 10, 1988 after Tonie Walsh and Catherine Glendon, both activists on the Dublin gay scene, decided it was time for Ireland’s gay and lesbian population to have a free publication of their own.