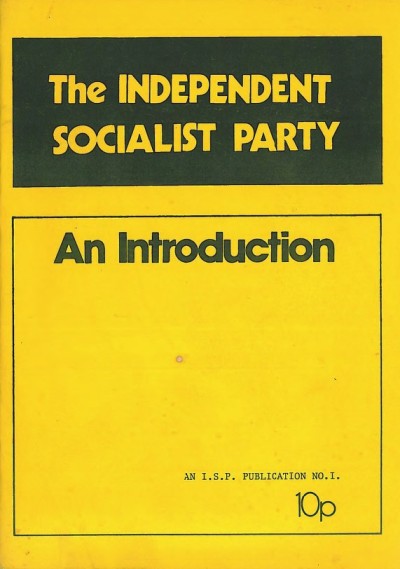 This document - produced by the Independent Socialist Party,  [and see here ] is very rare and provides an insight into one of the shortest lived left political parties in Ireland. Formed in 1976 by a group who had briefly joined the first incarnation of the Irish Republican Socialist Party the ISP first appeared as the Irish Committee for a Socialist Programme, seeking a more political route forward than the IRSP. Its most high profile recruit was Bernadette McAliskey.

For a period it looked as if it might merge with the Socialist Workers’ Movement into a single organisation but there was no support for such a measure [see comment #1 below]. Shortly afterwards the ISP disbanded.

This Introduction, labeled ‘I.S.P. Publication No. 1’ gives an overview of the ISP. It starts with a quote from Connolly:

We hold it to be our duty to assist and foster every tendency of organised labour in Ireland to found a Labour Party capable of fighting the Capitalist parties of Ireland upon their own soil.

The Introduction by the ‘Political Executive of the Independent Socialist Party’ argues that since 1968 socialist ‘have been searching desperately for ways and means to spread the socialist message’. It notes how socialists opted for PD, ‘then a militant civil rights student group, ‘others joined the Labour Parties’ and ‘others, especially after 1969 joined either wing of the Republican Movement’.

The 1969 pogroms, the 1971 Internment swoops, the massive resistance after Bloody Sunday, the rise of the Loyalist paramilitaries and the inadequacies of the Provos, and now the bourgeois backed Peace Movement are all events which have forced socialists to take stock of their views. We have. Which is why we are in the I.S.P.

And tellingly it asserts:

As a result of experiences and analysis of the social conditions as well as the historical experiences of class struggle we reject elitism, whether of the Republican or Leninist variety. The working class is relatively educated and literate and therefore can be approached openly with socialist ideas in ways not available to socialists in the past. We firmly believe that socialists have to sink deep roots in the working class movement to prevent elitism emerging. For elitism leads eventually to the divorcing of the struggle from the peoples needs.

It also suggests that:

The rest of the document deals with the perspective of the ISP in relation to various areas under specific headings, including International Perspectives, Party and Class, Anti-Imperialist, The Unresolved National Question and Marxism and Republicanism amongst others.

Of particular interest is a paragraph under the latter heading of Marxism and Republicanism which argues:

Republican validity in so far as it has any validity as a revolutionary creed, is that it has struggled against imperialism. Indeed it seems to have been the main if not the only force to do so. Consequently socialists have been forced into taking positions either for or against defence of Republican armed struggle. But socialists should not confuse strategy and tactics. In principle it is correct to struggle against imperialism. But that does not mean justification, or defence of the methods used by Republicanism. On the contrary, if socialists believe in what they profess to believe then surely the main task is not abstract defence or criticism of Republicanism but instead positive leadership in the anti-imperialistic struggle. Only when anti-imperialism is seen as not necessarily being synonymous with Republicanism will the masses flock to the anti-imperialist banner and Cork and Belfast workers will stand shoulder to shoulder in common cause. 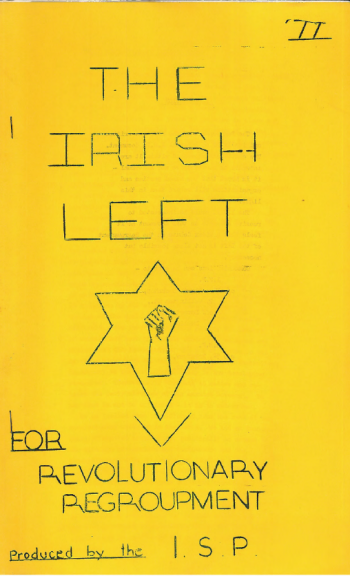 The Irish Left: For Revolutionary Regroupment (1977) 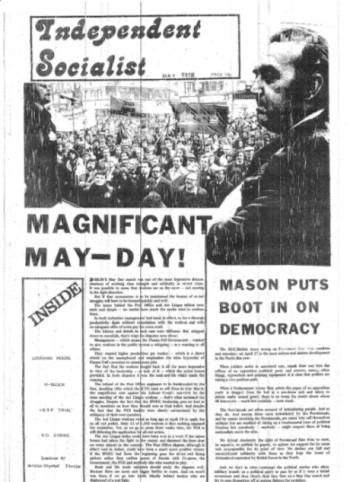 Independent Socialist Party in the archive